The Men Dancers: From the Horse’s Mouth

Through this event the cast was able to share stories and give insight into their personal world of dance. Lar Lubovitch, with his first choreographic work projected on a screen behind him – his audition piece for The Juilliard School – read the story below. 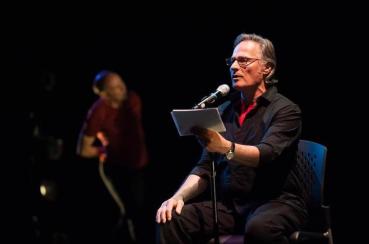 Lar Lubovitch reading his story to the audience

A little less than a century ago, in pursuit of the freedom to dream, my grandparents left Russia, settled for a few years in Paris, eventually crossed the big waters to Montreal—and then between the two great wars, finally stopped running when they reached the vibrant immigrant ghetto of Chicago known as Maxwell Street. It was there that I began my life, and there at the age of 5 that I discovered the dancer in me. We lived on the second floor of a building whose windows looked directly into the second floor windows of a Woolworth’s Five and Ten Cent store across the street, which everyone called the Five and Dime. Its red lacquered store front sign with big gold letters, its polished brass doors opening onto counters displaying trinkets, toys, ribbons, lipstick, rouge, sundry and gewgaw of every description. To my child eyes it was a carnival of the imagination.

One winter night in the midst of a bitterly cold Chicago snowstorm, a raging fire bellowed through the windows of my Five and Dime. All through the night, red fire engines wailed from the street, throwing gushers of water onto the roof. By the next morning, illuminated by a blue-blue sky and a brilliant winter’s sun, the gushers of water had expelled back through the second story windows and frozen solid into giant cascades of clear, smooth ice, and suspended within their cores, all the teddy bears, dolls, jewelry, shiny trinkets and doodads now held captive within the gleaming frozen waterfalls. The sight of this astonishing image sent my mind and body into a wild dance in which I cast myself as a teddy bear caught in the cataclysm. Choked by smoke then tinged by fire then cooled by water and lifted and hurled and sent spinning through the deluge until finally, inexorably, slowed to a stop within a frozen tomb of ice through which I could see with my wide open black button teddy bear eyes the faces of children in the street held back by firemen in black slick coats and red hats from saving me from my cold fate. After that, and for many years hence, I improvised dances in response to my life—usually alone in the living room with the furniture pushed back, and occasionally with willing friends.

It wasn’t until I was in college at the University of Iowa that I discovered a world of people who danced and made up dances existed far, far away in a magical kingdom called New York. I was advised to go there and seek out The Juilliard School and found myself one day at the enrollment desk filling out an application to audition. To my chagrin, I was told that I had to do a dance the next day for a panel of teachers whose glamorous names I’d never heard before—amongst them, José Limón, Antony Tudor, Martha Graham, and Anna Sokolow. The girl who auditioned before me did a tap dance on toe shoes while playing the marimba. I was very impressed. But she was lacerated, chewed up and spit out by Anna Sokolow—a now nearly forgotten, but truly great mid-century choreographer renowned by her students for her cruelty. For my turn, I danced a short piece that I’d made overnight in a narrow rectangular room with the bed stood up against the wall at the Manhattan YMCA. They must’ve liked it because from that moment on I was given the privilege of a life in dance.

Next year will be my 50th year as a dancer, the 45th anniversary of my company and my 70th birthday. But to this day, the sight of a great dancer dancing still gives me the same thrill as the frozen waterfalls of the Five and Dime fire.